When the science-fiction television series “Lost in Space” debuted in 1965, the fantasy of robots working alongside humans played prominently in space-focused entertainment.

Maybe you remember the 1960s “Lost in Space” TV show or binged on the Netflix revival.

It’s like Swiss Family Robinson, except this space-travelling family finds themselves marooned on a distant planet instead of a tropical island. 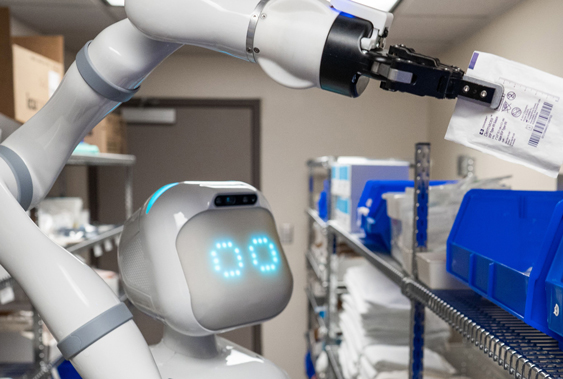 For safety, the family assigned a robot to look out for young Will Robinson, the boy in the family.

If you’re familiar with the show, you recognize the robot’s signature phrase, typically delivered in robotic panic, arms flailing: Danger Will Robinson!

But unlike the personal bodyguard, the HMH robots support – not replace – our people. Collaborative robots – sometimes called cobots – provide a win-win, allowing our clinicians to focus on making the human connections that matter. 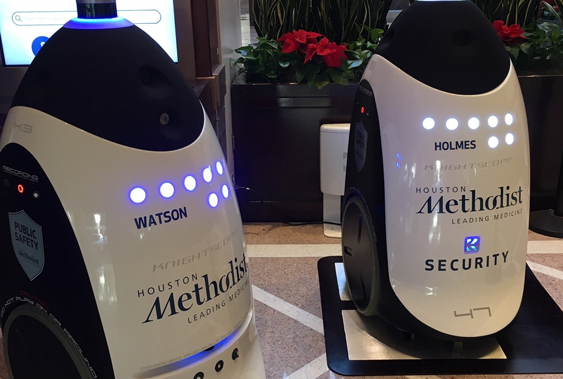 “We often hear of patients and visitors commenting on how cool it is to see Houston Methodist bringing in forward-thinking technology that’s focused on allowing staff to have more time with patients,” said Agata Rozga of the company that created Moxi.

Moxi has handled a number of non-patient-facing logistical tasks. Gathering supplies, setting up rooms for incoming patients, fetching a bandage from the supply room – Moxi has taken on tasks like these. This has freed up nurses, giving them more time to focus on patients.

Some HMH clinical staff even have referred to Moxi as a teammate, greeting the robot in the morning and thanking her for assistance.

While the Moxi pilot has supported clinical teams, robots Holmes and Watson give HMH security officers a glimpse into areas where officers aren’t present.

Deployed in the HMH hallways, they’re the first security robots to patrol a healthcare organization. Although they don’t interact directly with visitors, they do act as eyes and ears for the HMH security team, providing critical visuals.

“The coolest thing about Holmes and Watson is that they act as a mobile security operations center, enhancing our security infrastructure,” said Juan C. Martinez, operations project analyst.

Each robot is equipped with 360-degree camera capabilities, thermal imaging and a two-way audio system allowing officers to see what each robot sees, and provide 24/7 security footage. 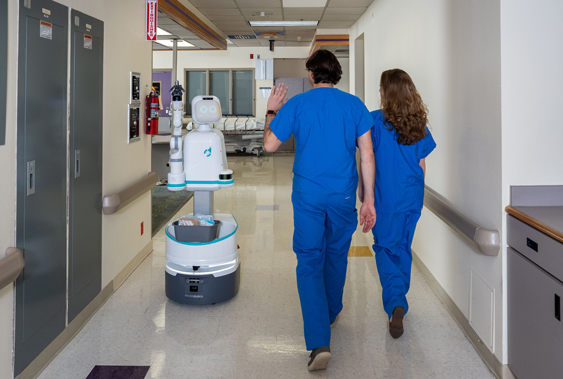 “Each robot is also equipped with a red emergency duress button. Although no one has yet needed to use it, it’s available, and our security officers are prepared to act when the time comes.” 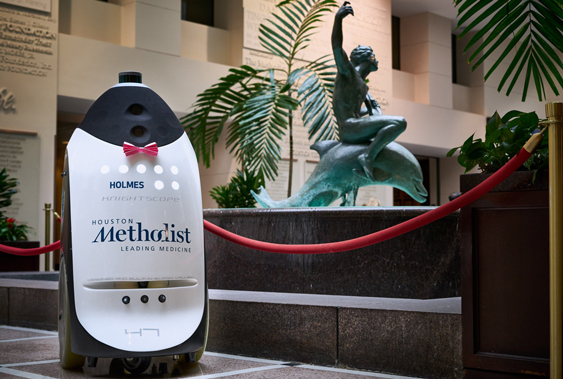 But first, let me take a selfie.

One unexpected appeal of these innovative, collaborative robots is their ability to enhance the overall patient and visitor experience.

Walking into Walter Tower or Jones 9, it’s common to see visitors waiting to pose for a quick selfie with the HMH in-house celebrities − Holmes, Watson and Moxi.

“Holmes and Watson look much like the Star Wars character R2D2, so visitors are excited to see this and of course, don’t hesitate to take the time to snap a selfie,” Martinez said.

“So far, their novelty has been a huge appeal,” he said.

“We’re excited to be innovators in providing the ultimate patient experience, while adding an extra layer of security.”